Courtesy of Bill Eaton, who was in the computer scrap business in the 1970s, and bought the Bell Labs GE-645 about 1972. 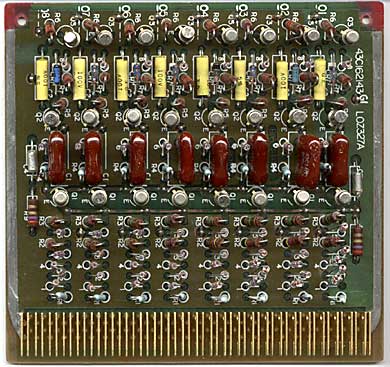 Circuit board from Bell Labs GE-645

These are not the two-foot-square boards filled with integrated circuits used in the 6180, they're much smaller. The 645 boards are two-layer, about 4x5 inches, and contain individual transistors, resistors, diodes, and capacitors.

In the Air Force and stationed in Phoenix in 1967, I was a nerd and computer geek long before those labels were coined. It didn't take me long to find the GE salvage operation, so I got a part time weekend job working for a salvage company and took computer parts in exchange for my wages. I contacted an engineer buddy about my good fortune :-) and we started to squirrel away "goodies."

After getting out of the service in 1971, I finished my engineering degree at Purdue and went into the used computer business with my buddy, dealing mostly in memory systems and tape drives.

We had the opportunity to buy the GE-645 that came from Bell labs. We actually got it all back together and used it as a test bed for the memory systems and drives. We did not have the GIOC, but had a 600 line IOC, and we had several copies of GECOS on tape that we picked from salvage.

In the mid 70's, due to the rapidly changing computer market and GE's changes (Honeywell), we sold the hardware and got out of the business. I have no idea what happened to the 645. I did, however, end up with a number of boxes of circuit boards that have been stored with my other electronic treasures for many years.

Most of the boards I have are line-drivers, and I do remember there were a lot of them in that machine. The line-drivers were used to talk between frames and to peripherals. I also have a few logic boards, flip flops and nand gates, and some of the 400 line boards from the peripherals. I drew schematics of the 600-line boards and have bench tested some of them -- they are still working.

I have some pictures of the 645 test-bed setup somewhere around here... it was a long time ago. If I come across them, I'll ask the editor to post them on the website.