Wiki document on how to build a Multics simulator and install your own Multics is the most up-to-date information on using the simulator.

Version 3.0 of the Multics simulator was released, with many improvements.

(07/29/21) Multics Release 12.7 is now available for use on the DPS8M simulator. Eric Swenson is the release coordinator. Changes are discussed on dps8m-users, dps8m-developers, and on Multicians@groups.io. Dan Cross and Doug Wells created a

Release 12.7 GitHub repository for the release.

Eric has documented Software Development Procedures for the Multics Simulator for those who wish to submit changes to Multics.

You can access the simulated Multics using several mechanisms including SSH. Service is available for free, as-is, with no guarantees. (Jeffrey had to disable direct Telnet access to BAN due to non-stop automated attacks. Mosh, SSH2, Yggdrasil, and cjdns connections are still accepted: see the web page.)

(05/31/18) Charles Anthony gave an hour-long talk about his history with the DPS8/M emulator on Feb 11, 2018, at the Vintage Computer Festival Pacific Northwest 2018; VCF taped the talk and have put it on YouTube.

How to Install and Run a Simulated Multics

Here is a detailed step-by-step cookbook for downloading and setting up your own simulated Multics.

The cookbook is based on Eric Swenson's Wiki mentioned above, and is broken down into instructions for Mac OS X, Linux, or Windows machines, running on Intel (32 or 64 bit) or Raspberry Pi hardware.

What It Can Do

Simulated Multics is a complete multi-user operating system, running on simulated Honeywell DPS8M processors. It can support almost everything the standard release of Multics could ever do -- with the exception of networking.

A community of developers has contributed bug fixes and enhancements to Multics beyond the last version released by Bull. The operating system and commands have been modified to support dates in the 21st century. Several shared systems have provided stable service for months, shutting down only to install new releases.

GitLab repository for the simulator is available. With major assistance from Charles Anthony, the simulator booted Multics on Saturday 08 November 2014. It has continued to improve since then, with contributions from several other Multicians, including Gary Dixon, Eric Swenson, Olin Sibert, and Daiyu Hurst.

Prior Multics simulator projects such as Michael Mondy's provided useful experience and learning.

At the ACSAC 30 conference in December 2014, Olin Sibert demonstrated simulated Multics to a distinguished audience. He started the simulator on a Mac laptop, booted Multics, wrote a little PL/I program, compiled it, and ran it. A panel of Multicians discussed "Multics: Before, During, After". 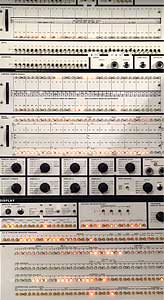 Living Computer Museum in Seattle (currently closed) has posted a

video on YouTube of a real 6180 maintenance panel booting the Multics simulator. The panel is connected to a Linux machine by a special board.

Charles Anthony modified the DPS-8/M emulator code to support the 6180. The panel was put on eBay several years ago and I purchased it. My understanding is that it came from Oakland University. I believe all panels of that system were saved and nothing else. The interface between the emulator, which is running under Linux on intel i7, is serial to a BASYS3 Xilinx that in turn drives two logic boards attached to the panel's wiring harness. All lamps and switches are available to emulator and that includes the scrolls as well. Just about all displays can be achieved at this time (though maybe more later?). The emulator is booted via switches on the front panel set to 024000717200 followed by the initialize button.

The system boots up to idle in just under 2 minutes, which, from what I understand, is blazingly fast. We are reorganizing our 2nd floor exhibit and hope to develop this into an interesting display with an interactive terminal, as well as remote access, at some point in the next few months. We are also *very interested* in hosting Multicians to celebrate Multics sometime this year. More details regarding this to come and we're open to suggestions in terms of significant/convenient dates.

Multics on a Raspberry Pi

Raspberry Pi. The computer is about the size of a deck of cards. He wrote me:

[VFS] I have a Raspberry Pi 2, which has a 900 MHz 32-bit quad-core ARM A7 processor. It has one gigabyte of memory, so the simulator, which uses 270 megabytes of memory, doesn't page. The file system is located on a MicroSD card. My current Linux system has six gigabytes cofigured.

[VFS] It runs Multics at an approximate half a MIP speed: performance test results. It's probably close to the first Multics processors we got at Ford. When the simulator is able to support multi-threaded virtual processors, I should be able to configure a four processor Multics system and get increased throughput, since the A7 is quad-core. There is a Raspberry Pi 3 available, which has a 64-bit processor, but still comes with a 32-bit operating system. (While there are 64 bit operating systems for the RPi 3 on the market, none are packaged with the Raspberry Pi. If we hear of anyone installing one and running Multics it we would find out the performance implications.) I suspect it provides better performance, but I have no specific information. (Running the simulator on my MacBook Pro creates a Multics machine with approximately 7 mips performance.) 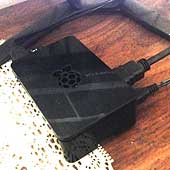 Closeup of the computer. (click for a larger view) 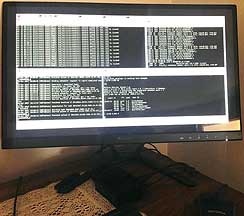 The screen shows the Multics operator console in the upper right and a user login in the lower right. (click for a larger view)