The Benchmark and the Sale

[David Warley] I still think the real STC Multics story is how Alex Park bought it thinking he would get a great Executive Information System, he never did. Instead we gave it to the Engineers as a useful tool.

The Multics system at STC was an experiment in interactive services for managers and engineers. STC was a GCOS user and the sale was made to Alex Park, CFO, who had an Intellect demo on a visit to Phoenix. He bought the proposition that he would be able to sit at his desk and get answers to natural language questions like "What was Switching Products profitability last quarter by sector?". Of course, the demo was a little ahead of the reality!

[David Warley] Multics provided the support system for an enterprise modelling project using SSADM. John Miller of STC developed a graphical tool to allow analysts to create and amend SSADM drawings on line. This used the Multics Graphics System (of course) and YACC to create the command line parser. We jointly published in the ITT Software Engineering Journal of 1983.

[Pete Gillard] I worked at STC between 1981 and 1983 in the Database Design group. One of my key tasks was porting Logica's Rapport RDBMS to Multics as an alternate to MRDS. Rapport was written in FORTRAN 66 (actually a derivative "RATFOR" based on Kernighan and Ritchie's software tools than generated the F66). This was, at the time, the most portable language. It was a couple of years later that C became prevalent. The major Fortran problem was that COMMON areas, used extensively in Rapport for communication between subroutines was not automatically initialised on program invocation but persisted for the life of the user session. We had to put in some creative initialisation code in Main. The machine dependent routine for Rapport on Multics were a pleasure to write. The architecture of Rapport was such that all OS dependencies were isolated into a couple of libraries. We used as many OS facilities as possible to ensure the port fitted as well as possible into the Multics environment. Where on other OS's the Rapport Forms interface had to be specifically code for each terminal type, on Multics we used the OS terminal definition facilities to provide us with automatic support for (almost) all attached terminal types. We went live with an application that managed real time inventory for automated inserters on circuit board production lines.

[Pete Gillard] Following STC, I moved to Logica and with them worked on Rapport Multics installations at French Ministry of Agriculture, Dutch Ministry of Social Affairs, and the Pentagon.

[David Warley] My job was to introduce Multics and 'market' it within the STC user community. The principal take up was in email, (used as a project management tool) and experiments with relational databases.

The system was a single processor based alongside the GCOS mainframe in our New Southgate data centre but sharing the terminal network. The main users were our engineering and manufacturing people. (STC designed and built telecomms equipment).

Our Honeywell on site analysts were Mike Auerbach and Mike Pandolfo. We showed MP an Apple II running VisiCalc and he created 'Multicalc' the first truly interactive mainframe based spreadsheet.

Sadly, the advent of the PC spelled the end for shared logic timesharing systems as personal productivity tools. My Multics support team transmuted into the first desktop computing support team. In 1984 STC acquired International Computers Limited, and computing within the group was rationalised on 'our own' VME based mainframes. Honeywell and Multics left together. I think the switch off date was early 1985.

I made a career move into ICL Network Systems where I worked with an X.400 message switch based on Stratus fault tolerant systems. The Multics lineage in VOS was clear to see. I met up there with Norman Beazant, a fellow Multician, who joined me as one of my Bid Managers. He had worked on Multics in France developing a front end to a Cray supercomputer. 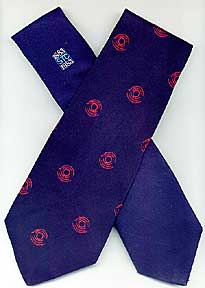 Multics arrived at STC for their centenary year, so it coincided with lots of corporate hoopla. Of course, we all got ties to mark the occasion. The Multics tie was made by Sharps Freeman Ltd of Maidstone, Kent.

Prior to installing our own system at STC we bought time on the Brunel University system. Then one morning the screens were blank. Brunel told us that they had lost power because the alternator/generator rotor had burned out. We asked them how long it would take to fix, they said "Next academic year when we get funds to buy a new alternator".

Being a little more impatient than the academics, we paid a local engineering firm to rewind it for them. The outage was reduced to only 72 hours. When I visited Arizona State later that year, I discovered they were running their system on line power, and risking the consequence of a lightning strike. Of course, electrical storms in the Arizona desert hardly ever happen!

I'm sure it never happened at Dearborn!

[Graham Asher] Multicians may be interested to know that I worked on Multics during 1981 and 1982 at Standard Telephones & Cables (STC) in North London, at the New Southgate site. I was very junior; it was my first job and I was one stage up from trainee programmer, having never seen a computer until 1979, after I left university. I first heard of Multics when buttonholed by a Scottish Honeywell chap at a company booze-up in (I think) a pub called The Cavalier, near work; he said it was an exciting new system that ran a snazzy language called B. I don't think he mentioned PL/1.

I wrote some PL1/ programs to support users of the company timesharing service but I can't for the life of me remember what they did, if anything. I sat next to Mike Pandolf, who described himself as a Multician - first time I'd heard the term - and he eventually made an official request, via our boss (Les Russell), that I stop asking him irritating questions. I was very hungry to learn about programming, if not about operating systems, and he seemed to know it all. He was writing a spreadsheet in PL/1 and I was intrigued that he was compiling expressions into reverse Polish notation. I took over this spreadsheet project briefly before I left STC.

I still remember how the '>' delimiter in paths made it slow to talk about filenames ('fred-greater-than-joe-greater-than-bill...'), and the randomly generated temporary filenames that always seemed to be composed of large numbers of b's and B's. I remember with affection the ability to break into a running PL/1 program and do in-source debugging, something I didn't see again for many years. I also clearly remember my boss, Les Russell, explaining to his team, poker-faced, that MULTICS stood for 'Management Understands Little That Involves Computer Systems'.

I have forgotten almost everything else.

[Deryk Barker] Evidently the memories of the STC folk about this site conflict somewhat with those of us who worked on it from the Honeywell site.

A few corrections: the "Scottish Honeywell chap" was presumably my old friend and colleague Iain Simpson and, as he confirmed in email the other day, he would not have talked up B on Multics, as we all knew there was no such language on that system.

B (the middle stage of the BCPL->B->C progression) was implemented (by the University of Waterloo) on GCOS. We were keen to (and eventually did) sell the B system to STC.

I implemented a clone (or as close as possible) of the Multics command_processor_ on GCOS using B. (Had abbrevs, active functions and a few other nifty things, although some of these functions were, perforce, rather kludgy - wish I still had the source).

Mike Pandolf (he later changed his name to Pandolfo, the original family name from Italy) was only at STC for a year, prior to moving to CISL. Mike Auerbach was part of the sales team but never, IIRC, the support team for STC.

Interestingly, none of the STC people seem to recall the several UK Honeywell employees who worked on their site, including myself (SiteSA after Pandolf left), Iain Simpson, and Susan Cramond.

The xforum software was developed (by me) at STC's request. There was also the ISL (InterSystemLink) hardware and software, by means of which files could be transferred directly between GCOS and Multics.

The Multics end was originally coded by Mike P and cleaned up by me. The GCOS end (10,000 lines of GMAP) was coded by yours truly.

The ISL hardware was developed in the UK. I gave a paper on this system at the Fall 1983 HLSUA in San Diego.

I also seem to recall developing a COBOL-mode for Multics Emacs (although I'm glad I no longer have the source, I dread to think what my LISP looked like 20 years ago).