System M was installed in the Honeywell Phoenix Multics Development Center (PMDC) in Phoenix, AZ in 1972 to support Multics when it became a product.

.. plus other equipment for System MB, including a GCOS system that ran CUESTA (see below).

New versions of system software were exposed on System M after they had been checked out at CISL and MIT. The System M machine was also used for final packaging and tape generation for MR releases.

System MB was the part of System M that was used for benchmark support. CPUs and other resources could be switched from one machine to the other, allowing benchmark development while service was running, and then making a big configuration for actual benchmark runs.

The Phoenix Multics development group played a major role in supporting System M, since it was an internal development site. Frank Martinson managed the group that kept System M going.

[PWB] CUESTA was the load generation software. It ran on a GCOS 3 machine at Camelback. I worked for Honeywell FSO (Federal Systems Operations) in the 77-79 timeframe doing GCOS and later Multics benchmarks, the most significant of which was the EOP (Executive Office of the President) benchmark. The EOP benchmark had a lot of word processing in it. I entered a TR about compose performance. A response from the developer of compose, Ed Wallman, likened using compose to do the tasks in the benchmark to using a 747 to retrace the first flight of the Wright Brothers. A followup mail from Ed's manager, Tom Van Vleck, suggested that a simple fill and adjust routine be written to do the job. I still have a copy of that email. One night on System MB (the benchmark system) I wrote that simple routine, and using it reduced the configuration that we ultimately bid by an entire CPU. A few months later I joined Multics development and one of my first tasks was to make that fill and adjust routine a product. It (format_document) was never widely used, but its subroutine interface (format_document_) was used by several Multics subsystems including the mail system and forum.

[PWB] The RPV of the last instance of System-M was taken apart, its platters engraved and given as mementoes to the remaining Phoenix Multicians at (by then) Bull. I have one in my garage.

[PWB] The CRF building has reverted to its original retail origins and is now "In-Door Swap Mart". 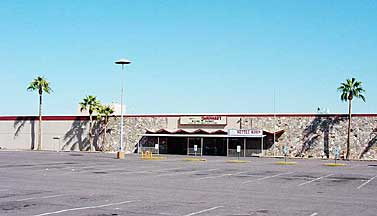 The former CRF building, with the Indoor Swap Mart sign on it. Photo by Anthony Nemmer, Sept 2003. Click for a larger view.