At the beginning of the Multics Project working with GE, they commissioned an "artists conception" of the ultimate machine room equipment. This roughly 3' by 4' painting/drawing currently resides in a somewhat narrow hallway on a 9th floor corridor of the Stata Center at MIT. I checked yesterday to see if it was still there and it was so I took a couple of quick shots of it with my iPhone. (Sorry for the bum lighting!) 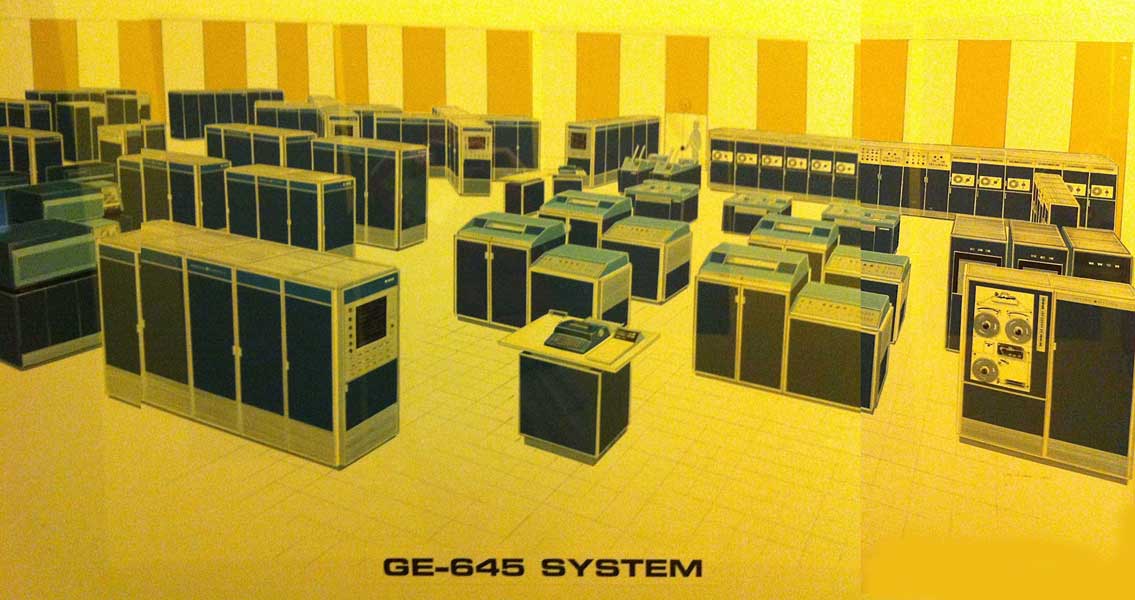 (Spliced by thvv. Someday we will replace with a better photo. Corby says he thinks Jerry Saltzer is responsible for saving the picture and having it framed and hung.)

(thvv comments: The operator console is front and center, with a Selectric mechanism and a little panel to the right that has the speedometer and the boot button. Front left is a GE-645 CPU. Another CPU is near the back of the room by the door. To the left of the rear CPU are two x-shaped configurations of cabinets: these are GIOCs. I guess those are memory boxes to the left of the GIOCs. The three-bay cabinets behind the front CPU, on the left side, may be Librafile ("firehose") drums, with drum controllers behind them. The MIT configuration had two PRT202 printers (not four), two card readers, two punches. I have no idea what the device is on the extreme right front, that appears to have three tape reels. I also do not see the RACE file which was installed in the Tech Square machine room for a while but never used. See the detailed configuration memo from 1967.)