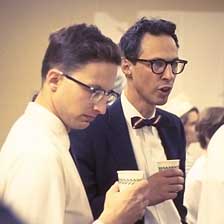 Jerry Saltzer and Corby at a celebration in the Project MAC conference room in 1968. Corby always wore a bow tie, and white shirts and ties were standard office uniform then. You can see Mary Thompson, in her F&T hat, to Corby's right.

Professor Fernando José Corbató, known to everyone as Corby, was the leader of the Multics development project at MIT Project MAC from its beginnings in 1963 until the mid-1970s.

MIT News Article. A memorial gathering was held at MIT on November 4, 2019, attended by many Multicians.

I had the honor of working for Corby on

Corby's own home page and the 1991 CACM interview for more biographical information. There is also a

Corby was interviewed by John Fitch for MIT Science Reporter On WGBH-TV Boston on May 9, 1963. He

Corby saw that it could be done, and made it happen. His vision was

We're used to these ideas now, but they were revolutionary in the sixties.

Leader of the Team

Corby convinced others to do things the way he envisioned. In the process, he inspired intense devotion to the project and to himself. He was a true gentleman; he never raised his voice to anyone, and he conveyed the utmost regard for each team member. We strove intensely for his approval. Some of his management philosophy is chronicled in "A Managerial View of the Multics Development."

One thing I liked about working for Corby was that I knew he could do my job, if he wanted to. Everybody felt this way. He might not have all the details of a particular situation, but once he found them out, he could program as well as the best.

There was a staff meeting for the whole project every week. Tuesdays at 11:00. (As I remember this time was chosen carefully: you want to have the meeting as early as possible in the week so that people could get new directions and go in the right direction as much as possible. But you can't have the meeting on Monday, not enough time to get all the facts. 11:00 was chosen because many folks didn't get in early in the morning; also starting at 11 gave people a strong reason to finish promptly at noon, so they could have lunch.) The staff meetings had an invariable format: Corby talked for 30 minutes, summarizing each team's accomplishments and describing the next step. Lots of times we all knew just what he was going to say, and yet it was still important to hear about progress from him, and to get his interpretation of the significance of various milestones. The last 30 minutes of the staff meeting were devoted to a technical talk by some team member, educating the rest of the team about a design or a new tool. 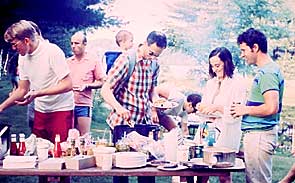 Corby was a recipient of the 1966 W. W. McDowell Award from the IEEE, the 1980 Harry Goode Memorial Award from AFIPS, and the 1982 IEEE Computer Pioneer Award.

A. M. Turing Award "for his pioneering work in organizing the concepts and leading the development of the general-purpose, large-scale, time-sharing and resource-sharing computer systems, CTSS and Multics." Corby's 1991 Turing Lecture

An MIT graduate student fellowship has been established in Corby's honor. 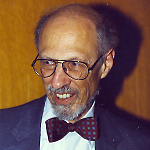 A party to honor Corby on the occasion of his retirement from MIT was held on November 22, 1996, at the Wellesley College Club. About 120 people attended, including his family, members of the Multics and CTSS teams, and colleagues from his career as MIT professor and department head.

The first person I saw when I arrived was my old boss Dick Mills, Assistant Director of Project MAC in the 1960s, and later MIT's Director of Information Processing Services. Many others arrived, including:

Remarks at dinner were MC'd by Professor John Guttag, who called on many members of the audience. Dick Mills asked, "Who's known Corby the longest?" and remarked that he'd known Corby since 1953, when they both worked on Whirlwind together. Prof. John D. C. Little topped that: he was Corby's graduate school roommate at MIT in 1951. Then Prof. Peter Elias spoke up: he was a Navy communications tech with Corby at Treasure Island in 1947. Peter Neumann contributed some of his inimitable puns (e.g., "Corbatov" instead of "Mazel tov" as a toast). Prof. Guttag read messages from other well-wishers who could not attend, such as Lee Scheffler. Corby's daughter Nancy and his wife Emily spoke. There were gifts, and toasts, and applause. Frans Kaashoek showed a video clip from the WGBH Telecast of "John Fitch, MIT Science Reporter" interviewing Corby about time-sharing.

Corby's not the kind of person you could "roast." Everyone who spoke returned to the themes of how much we'd learned from him, from his uncompromising regard for correctness, his integrity and directness, and his penetration into complex issues. His leadership of the CTSS and Multics teams enabled us to build new kinds of systems that had never been done before. And in his career at MIT as professor and administrator, Corby shared his intelligence, honesty, and concern for truth with thousands.

Professor Fano put it best, when he said, "Corby, you'll have to retire again next year, so we can have another party." 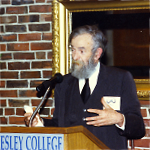 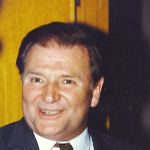 On June 19, 2004, a Multics Reunion and Dinner Honoring Corby was held at MIT. The Corbató Graduate Fellowship was announced. Multicians are encouraged to contribute, as a way of thanking Corby for his influence on our lives and profession.

The history of Project MAC explains Corby's primary role in the creation of the project and its success.

Corby wrote a Letter on the occasion of the shutdown of the last Multics system in 2000.